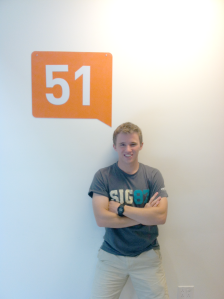 Last year, Kleiner Perkins Caufield Byers (KPCB), a venture capital firm in Silicon Valley, started a fellowship program for college students studying computer science called the KPCB Engineering Fellows Program. I was lucky to have been selected as one of the 29 interns in the inaugural class. Kleiner Perkins took students from across the country, ranging from freshmen (like me, at the time when I applied for the program) to juniors, and paired each of them with one of the tech companies in its portfolio. These companies included Twitter, Zynga, Groupon, Klout, Flipboard, Path, Chegg, and several more.

Along with seven other Fellows, I was placed at Klout (in San Francisco) for the summer. I was excited to learn this news in December 2011 because it gave me all of second semester to prepare for what I would be doing for Klout, which was mobile development on their iPhone app. I started work on June 11 and would work until the day before leaving for Penn again in the fall, August 30.

The 12 weeks I spent at Klout represent the most progress I’ve made as a programmer in such a short time. I was immediately thrown a huge amount of work and treated as a regular employee at Klout, not as an intern. From what I heard from the other Fellows, this trend held true at every company. Klout expected us to ship well-documented, bug-free code on a weekly basis.

Before I mention what I worked on specifically for Klout’s iPhone app, I should explain what Klout does. Klout measures your social influence online. You give them access to your Facebook, Twitter, and LinkedIn profiles, and they run a series of complex mathematical formulas on your social networks and each interaction you make. Their algorithms run every time you post, comment, retweet, etc. The end result is a number from 1 to 100 that’s called your “Klout Score.” If you’re a high school or college student who’s active on social media, you’re probably above 50. Your parents would probably be in the 30s or 40s. Barack Obama has a perfect 100, meaning that when he posts something on Facebook or Twitter, a huge number of people engage, and the people who are engaging have high Klout scores themselves. My Klout Score is a 61, although over the summer it peaked at 72 when I was posting obsessively on Facebook and Twitter trying to raise it.

So why does your Klout score matter? Well, the way Klout makes money is by partnering with companies that want to market exclusive content to top influencers in certain categories. Klout keeps track of which topics you’re most influential about. For example, if you post a lot about shoes, and if your Klout score is above 50, you would qualify for free shoes from Nike. It’s in Nike’s best interest to give free content to top influencers about shoes because those people are likely to post on social media and get a good response. It’s organic word of mouth marketing for companies, free stuff for consumers, and it’s the way that Klout makes money.

What I worked on for Klout was making this system (it’s called Perks) available for mobile. I spent all 12 weeks working on a Perks infrastructure for mobile, and I’m proud to say that the new product was released in late October to all Klout iPhone users. Making this system involved talking to a number of different teams around the office. I was on the Mobile team, but I talked regularly with the App Services team, the Perks team, the  Business Development team, and the Marketing team.

The summer was the best summer I’ve ever had for a number of reasons. Two of the top reasons were working at Klout and being part of the KPCB Engineering Fellows program (which includes nearly a dozen social outings with the other 28 students in the group).

Jeff is a current M&T sophomore in the Class of 2015. He is majoring in Computer Science within Penn Engineering and has yet to declare his concentration in the Wharton School.

One Response to “Summer in Silicon Valley: KPCB Fellows Program and Klout”