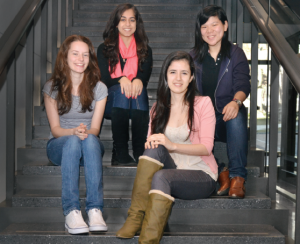 by Sneha K., M&T Class of 2015 (pictured with fellow WiCS board members, 2nd from left)

Every semester, Penn’s Women in Computer Science Club (WiCS) hosts a daylong event on campus for 100+ high school girls. We always start off by asking whether they intend to pursue or have considered Computer Science as a major; we’ve never seen more than ten hands go up. A good number of those who don’t raise their hands see this event as the perfect opportunity to skip school for a day; but a good number also have no idea what Computer Science entails. Several lectures, panels and coding puzzles later, we don’t hope to have every hand in the air, we just hope that most of the no’s change to maybe’s.

WiCS was created to increase participation by women in Computer Science. Founded in 2003, our club spreads awareness about Computer Science and tries to provide a sense of community to the women pursuing it. I joined the WiCS board my freshman spring as treasurer. A few weeks into the job I realized that our four-woman board meant that every member did a bit of everything for the events we organize – something I soon grew to enjoy. Apart from our semi-annual WiCS high school day, we organize biweekly Tech Nights (where we teach coding basics) and an all-day advisory program for high school teachers and counselors to increase awareness in schools.

Among the professional events we’ve hosted, perhaps our most popular ones were a resume review with Microsoft, an interview workshop with Google and a lunch discussion with Facebook. Social events have ranged from karaoke nights and cupcake-decorating study breaks to poker nights co-hosted by the Dining Philosophers. Our most interesting event, however, had to have been the open forum on the infamous “brogramming” incident. The incident started when someone suggested making “Brogrammer” shirts which soon led to a heated debate. The forum brought forward several important questions about subtle and explicit sexism in the field and allowed both sides to have their voices heard.

Many women in tech suffer from the imposter syndrome – the idea that one’s achievements are not deserved. As co-president of WiCS starting this semester, I hope to be able to weed this out and help women in Computer Science at Penn develop confidence in their abilities through increased participation in tech-related events. I’m extremely excited as we look for new board members and can’t wait to have them be a part of the club’s growth and progress!

Sneha is a current M&T sophomore in the Class of 2015. She studies Computer Science within Penn Engineering and has yet to declare her concentration in the Wharton School.