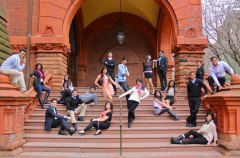 Masti, meaning flirtation or mischief, is Penn’s premier South Asian co-ed fusion dance group. I joined Penn Masti to learn more about my own culture and to enjoy a journey unique to the wide expanse of experiences made possible at Penn. It is also always satisfying to engage in some fast-paced bhangra at the end of a busy day.

Penn Masti’s mission is to educate the community about South Asian music and dance through instructional sessions, competitions, and performances. A lot of hard work goes into our shows, and ultimately Masti is about having fun and enjoying the company of teammates.

Most recently, Masti performed in its second-ever dance competition, Naach, at Hofstra University on Long Island. Our piece told the familiar story of a naive village boy falling in love with a haughty city girl, yet through the lens of Bollywood, hip-hop, and bhangra dance. Preparing the performance was no easy feat. Five days prior to the event, Hurricane Sandy descended on Philadelphia and meant lost practice time for the team. Further, we had to brave the rain-battered highways between Philadelphia and New York in three Zipcars – overcoming this obstacle started with listening to old Masti show soundtracks on repeat. The ultimate hurdle came when traffic hit and our performance time was mere minutes away. We were finally able to park, get into costume, and run backstage for what was admittedly the most exhilarating performance of the semester!

Our most recent milestone event was Masti’s annual show, “Go (The Bleep) To Sleep: A Series of Mastified Tales”. The show, a series of dances based on tales like Mulan and Jungle Book, took place in the Iron Gate Theatre on February 17, 2013. An amazing time was had by all!

Shaun is a current M&T junior in the Class of 2014. He studies Bioengineering and Biophysics within Penn Engineering and Management and Statistics in the Wharton School.