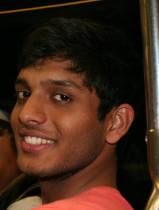 As a student from multiple different backgrounds, I found it extremely difficult to decide where to go for university. I am originally from Bangalore, India, but I was born in Dubai, in the UAE, and lived there my whole life before coming to Penn. In Dubai, I attended JAPS and Dubai College, both of which are British schools that have adopted the British system of education (A-Levels). Consequently, the vast majority of my friends only applied to British universities, such as the London School of Economics. On the other hand, my brother and all of my cousins came to the United States for their college education. Naturally, I was torn between both places, so I ended up applying to universities both in the US and the UK.

I was accepted by Jesus College, Cambridge to study Engineering, which was my top choice in the UK, as well as into the M&T Program here at Penn, which left me with probably the most difficult decision I had ever had to make. Cambridge, on the one hand, would have provided me with a fantastic education on the theoretical and technical aspects of traditional engineering, and allowed me to gain a Master’s degree in Engineering in just four years. However, Penn provided a much broader, well-rounded education in both business and engineering, and has allowed me a whole year to decide what form of engineering I want, as well as giving me a wider range of options within the Engineering school itself. I came to Penn with the intention of majoring in Mechanical Engineering for my BSE, but after a few months I decided to switch my major to Computer Science. I never had the opportunity to learn code in high school, so if I had attended Cambridge, I would have never discovered my passion for Computer Science and the joy I get when I solve problems using code. The Business aspect is also crucial in teaching concepts that are absolutely vital to any sort of managerial position in today’s world, and only after coming here have I truly understood the value of this knowledge for any job.

I am 100% sure I made the right decision by choosing Penn, despite the fact that waking up to snowstorms sometimes makes me wish I was sitting on the sunny beaches of Dubai again. Despite the somewhat heavy workload, I think balancing school with social life and physical activity is extremely manageable. I, personally, am a cricket player, so was pleasantly surprised when I discovered Penn’s Cricket Club and the rising popularity of cricket here in the US. Aside from the practices and games I play for cricket, I often play pick-up basketball, and I’m a member of the Wharton Investment Trading Group. Even with all of these time commitments, I also have the time to enjoy myself most weekends.

There’s such a diverse range of people from all over the world and with all kinds of interests, that everyone can find their niche. The M&T community, in particular, is fantastic. It is extremely humbling to be surrounded by so many brilliant, friendly people that are always willing to lend a hand with practically anything. I am often amazed by the achievements of my peers, and have already made some truly great friendships within M&T that I am sure will last a lifetime.

Reuben is a current M&T in the Class of 2017. Hailing from Dubai, he studies Computer Science within Penn Engineering and has yet to declare his concentration in the Wharton School.