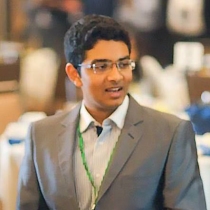 I should start by saying that there is no such thing as a typical M&T student. There’s not too many of us in a class, but there’s a huge variety of interests and goals. The only common factor is that everyone is really passionate about something and normally very good at it. There’s also of course the fact that we all wanted to study both business and engineering because we couldn’t let go of any one of them. I guess it’s convenient to be able to build a stereotype, but I just don’t think there’s any such stereotype that would do justice to the M&T Program. Hence, the M&T Program is really what you make of it, whether you’re more on the Management or the Technology side of things, or just really cannot decide. So everything that follows is just my personal experience.

I’m from New Delhi, India and love technology and turning great technology into a business in equal parts. The M&T Program at Penn was my top choice then, for obvious reasons. However, I had also received an offer from Oxford University in the UK to study Computer Science. There were a lot of things about Oxford that were extremely enticing: the Tutorial System, the fact that it was closer to home and I had family in the UK as well, and the fact that well, it was Oxford. So here I had the M&T Program, my top choice within the US and on the other side, Oxford University, my top choice in the UK. So why did I finally go with the M&T Program at Penn?

I guess in many ways it was a personal decision. I cannot say objectively that any one university is better than the other, but I can say that M&T is a better fit for me. As someone who enjoys the practical aspect of education, Penn and M&T offered so many more opportunities to do something real, and to interact with the vibrant technology community in Philly, New York and even the Valley. The fact that Penn was home to PennApps, the country’s biggest and best (I’m currently an organizer, so there’s obviously no bias here) college hackathon, played a big part in my decision, since to me it showed that Penn had an active hacker/technology community, which was very important to my decision.

So even though it took me almost a month to make this decision (turning down Oxford is not something you do lightly), I’ve never since regretted it. I’m doing everything I wanted to do in college and so much more. I’ve discovered this amazing entrepreneurial culture at Penn that I doubt I’d find anywhere else, except maybe the Valley, and I love it. M&T allows me to bridge the divide between my two goals of running a company and building things by letting me do both. And perhaps the best thing is the community of M&T students, since everyone is just so incredibly smart and passionate about what they do, that you can’t help but be inspired to go and do something great.

Pranav is a current M&T in the Class of 2017 from New Delhi, India. He studies Computer Science within Penn Engineering and has yet to declare his concentration in the Wharton School.