Studying abroad in college was something that I had always envisioned myself doing. But with the growing list of classes that I found myself wanting to take back on campus, that high school aspiration seemed to be more of a dream rather than a reality. The Center for Undergraduate Research and Fellowship’s John Thouron Summer Research Prize, however, changed that. Studying at the University of Cambridge as a Penn Thouron Scholar has sure enough been one of my most exciting and memorable summers thus far.

Through the John Thouron Summer Research Prize, I, along with two other students from Penn, have been able to experience the UK culture and study at the University of Cambridge for the summer. There is no doubt that Penn is old and historic, which is a part of its charm; however, being here at Cambridge has really put that into perspective. The University of Cambridge was established in 1209. Just let that sink in a bit – Penn was founded more than 500 years after that. It’s humbling to think that a person can study in a place that has been here far longer than I can even begin to imagine. As such, in addition to taking a Cambridge supervision (research independent study with a one-on-one supervising professor), I also took English Gothic Architecture and Painting in England. Every time on my way to class, I was greeted by one of the most impressive gothic chapels in the nation which has stood there since the 15th century. You can walk five minutes down the road and so easily see masterpieces painted in the 1500s. I lived in Pembroke College for the 8 weeks and it still sports Christopher Wren’s first building and one of the first chapels in the Classical style. Being at Cambridge has left me in utter awe and feeling quite insignificant – but in a very good way. (On a more practical side, these classes will hopefully fulfil both my global requirements while allowing me to indulge in my love for art history, something that I found hard to do with the dual degree course load – so thumbs up there!) 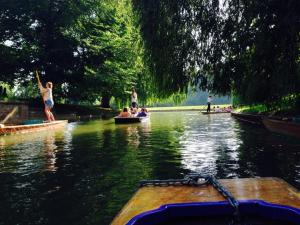 Punting was a must do, and doing it ourselves even more so. Seeing the colleges from behind on the river Cam made them all the more beautiful. Plus, there was the fun of breaking out in laughter with friends when we rammed into the river banks and found ourselves actually end up going down the current horizontally or even backwards. There’s no complaining about the food either, but maybe about the dollar-pound exchange rate. The market square probably had the best fruit I’ve had in recent memory and there is a Belgian waffle stand to die for. The crepe cart also became a staple in my diet in Cambridge.  The only thing that might be lacking is a 24-hr Wawa equivalent, but then again if you’re ever out in Cambridge between 6pm and 2am there’s always the Trailer of Life that’s ready to serve you chips (fries) and burgers.  It’s startling to think how much food I have consumed at Cambridge, but I would like to think that the more running outside I’m doing because of the lovely area will be able to compensate for it.

The wonderful thing about studying in Britain is that continental Europe is so close. It was easy to plan short weekend trips, but on the other hand it’s incredibly hard to figure out the number of places to visit that is sensible but at the same time will satisfy my appetite to travel and explore. I have to say the canals in Amsterdam were gorgeous and public transportation impeccable. I will probably never get my fill of the Belgian chocolate I got while in Brugge, and I can now brag I have been to the café in Scotland where the infamous Harry Potter series all began.

Being a Thouron Scholar definitely has its perks. Not only have I been able to become great friends with the other eight from Penn, Harvard, and Yale, I have also been able to engage in incredibly thoughtful discussions with them and Sir Rodger Tomkys, a former master of Pembroke College and a retired British diplomat. In addition to the immense amount of knowledge and experiences from which he draws from, he also chooses the best variety of wines and cheeses. It’s a different sort of lesson that any foodie would appreciate. The Thouron family themselves are incredible, and having the opportunity to meet them and the other scholars has been the equivalent of getting an extended family.

I could ramble on forever about my summer experience at the University of Cambridge, but for now I have rambled on for far too long. This summer abroad has been an irreplaceable experience and one that I will cherish and never forget. An M&T alum and previous Thouron Scholar told me that this would be one of the best summers of my life and I cannot agree more.

Emily, originally from Bryn Mawr, Pennsylvania, is a member of the M&T Class of 2016. She studies Bioengineering within Penn Engineering and Finance and Management in the Wharton School.